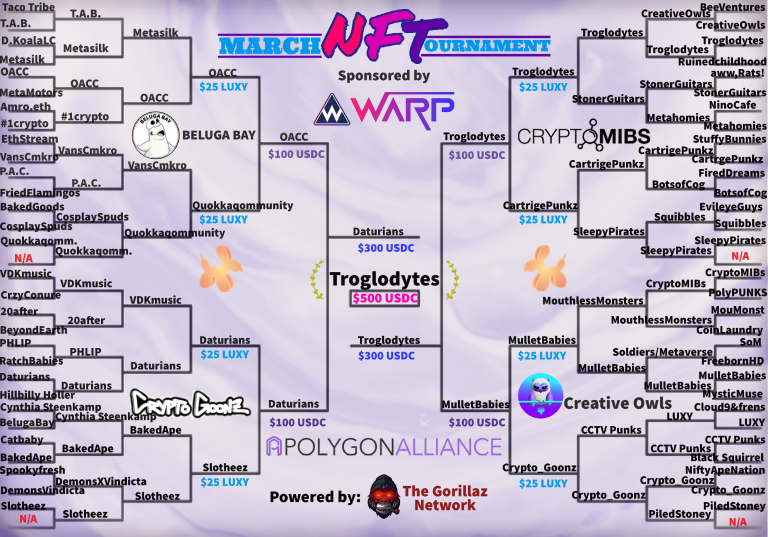 March Madness looked a little different for a lot of NFT artists and projects this year. @ShaneTWalker, @GorillazNetwork, and the team at @WARPBond have come together to sponsor a Twitter engagement Tournament. Sixty Projects from blockchains across web3 participated. Bespoke one human projects pitted themselves against larger blue-chip operations to compete for Twitter clout and a grand prize of 1,500 (USDC) and severalNFTs totaling about 3K (USD).

The competition began before the first tweet was sent. The @PolygonAlliance hosted the matchup selections on their voice chat channel in the Polygon Alliance Discord. Sixty project names were placed onto the ‘wheel of discontent’ to be matched up for the first round. Fates were sealed for many with this one step. Four lucky projects received a miracle first-round bye. Not having to compete in round one but moving automatically to round two.

The first round of 32 matchups began on March 15th at 2:00 PM CST and spanned four intense days. With eight matchups a day and staggered fifteen minutes apart, the referees had their hands full. The now-infamous tweet that began the tournament was from the matchup between @TacoTribeNFTs and @AbominableBunch. Taco tribe commented immediately with a simple yet compelling Tweet of ‘Tacos 🌮’ as captured below. Ten minutes into the competition, Taco tribe had garnered thirteen likes, six retweets, and three quotes. Taco Tribe fell short at the last minute and lost to T.A.B. but remains the winner in our hearts.

The second round of 16 matchups was completed between March 19-and 20. Our favorite tweet from this round comes from T.A.B. (see HERE) as we are a child of the 90s and have warm fuzzy memories of the Power Rangers.

Another favorite tweet, dear reader. comes from VDK Music, her embracing of “Dad” jokes brought joy and laughter to the community as a whole. View it HERE. Your welcome.

We cannot finish talking about round two without mentioning that a Demon Hoard was bested by a cute cuddly, squishy sloth. They both fought hard but @slotheezNFT cuteness eventually won out. Don’t worry dear reader, we haven’t seen the last of @demonsxvindicta and her Hoard.

While most round two matchups occurred amicably and without incident, a competitive spirit began to heat up between two prominent Polygon projects. Round two ended with several great projects eeking out wins at the last second and excitement to see what would happen next.

After a brief break, so the referees and Twitter could take a much-needed rest, the remaining sixteen projects were pitted against each other on March 23-24. Eight projects walked away victorious with $25 of LUXY in their pockets.

Here, dear reader is where the warm, friendly competition got a little heated. A tiny feud broke out within the family. GIFs were exchanged, a tear or two shed, alliances made and broken. But in the end, the projects hugged it out and everyone walked away as friends.

The remaining four matchups were completed on March 25-26 with just two matches a day. The match between Slotheez NFT and @DaturiansNFT was a close one with Slotheez in the lead at half-time. Both projects fought hard but Daturians snuck in to win in the last hour. Thus becoming one of the final four along with @mulletbabyclub, @TroglodyteSoci1, and @OldApeCC.

As a nod to the close battle fought by Slotheez, the Daturians pledged the round’s winnings of $100 donated by WARTPBond to the minting of adorable sloths. Those Daturains are classy all the way!

The final four projects competed on March 29th. Leaving the Championship battle between @DaturiansNFT and @TroglodyteSoci1 on March 31st. In a twist of strategy, both projects promoted each other in the final. Highlighting once again the strength of the NFT community and the WAGMI culture it fosters.

Ultimately Troglodyte Society came out victorious winning the $500 cash prize. The real winner is the Polygon community and all sixty participating projects. Showing the level of support even the smallest one-man projects receive by being a part of the tournament is invaluable. If you haven’t already, join the Polygon Alliance on discord HERE, website HERE, and follow them on Twitter @PolygonAlliance. 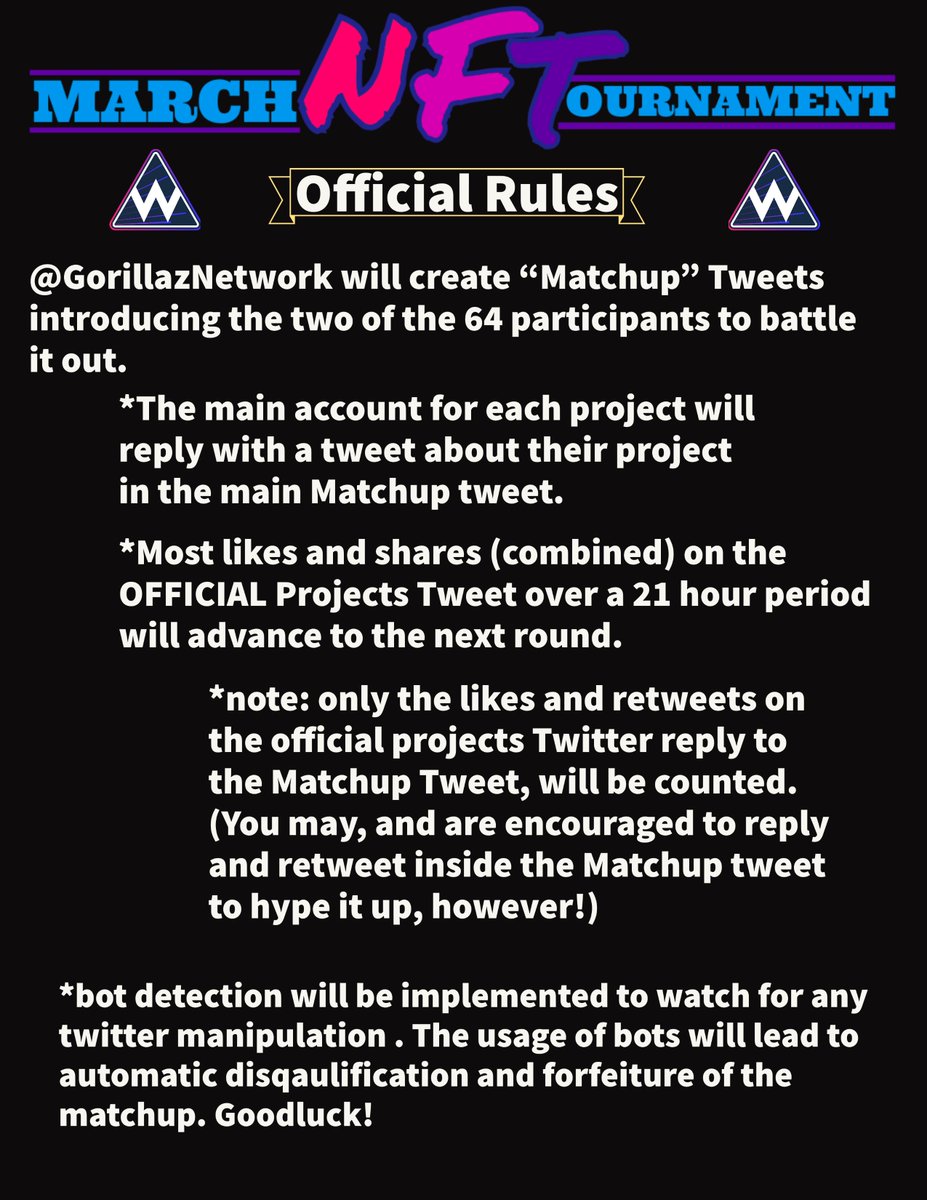